In order to operate at their peak the majority of public torrent indexes need the invaluable assistance of so-called tracker sites. Trackers use the IP addresses in their databases to direct users’ torrent clients to where content can be found.

In recent years OpenBitTorrent, PublicBT and Istole.it became three of the most important trackers in the BitTorrent ecosystem but have largely remained offline since January. As reported last Wednesday, all had legal issues in Germany.

Nevertheless, the BitTorrent system hasn’t collapsed. Aside from the wonders of DHT and PEX, a rising star in the tracking scene has been shouldering much of the load. Founded less than two years ago, Demonii has become the largest and most reliable tracker on the Internet today.

In February the tracker broke records by smashing through the 30 million simultaneous peer barrier, a landmark achievement representing a staggering two billion connections every day. But the site wasn’t finished producing big numbers.

As can be seen in the image below, during periods last month the site was serving more than 36 million peers, a new record for the increasingly popular tracker.

Given the increase in number of peers, it perhaps comes as no surprise that the number of torrents being tracked by Demonii has also increased. Back in February when the tracker broke the previous record, Demonii was tracking in excess of 4.2 million torrents, more than the top three trackers were serving in 2013, combined.

Today, however, Demonii is not running on all cylinders. Speaking with TorrentFreak the site’s operator confirms that the service is currently running in maintenance mode.

“Nothing too dramatic is happening, we just turned some things off while we try to sort out internal issues/maintenance,” he reports.

While the downtime could last another 12 to 24 hours (or more) the site is definitely coming back.

“The downtime is always lame, but rest assured all is being done so that the Demonii tracker will be online for long term,” TF is informed.

While that will be welcome news to the site’s supporters, breaking more records with the current setup probably won’t be possible until changes have been made. Noting that bandwidth costs are high “but worth every cent for the torrent community”, Demonii’s operator says growth is being limited by software.

“The tracker software has been starting to reach its limits in terms of connections. We have been working with different groups of developers
who have created their own implementation of a torrent tracker software. But we are not there just yet unfortunately,” he notes.

Nevertheless, the records achieved recently were well received, particularly those connected to newer technology. Although tiny in comparison to IPv4, Demonii’s IPv6 stats have increased 100% in just six months. 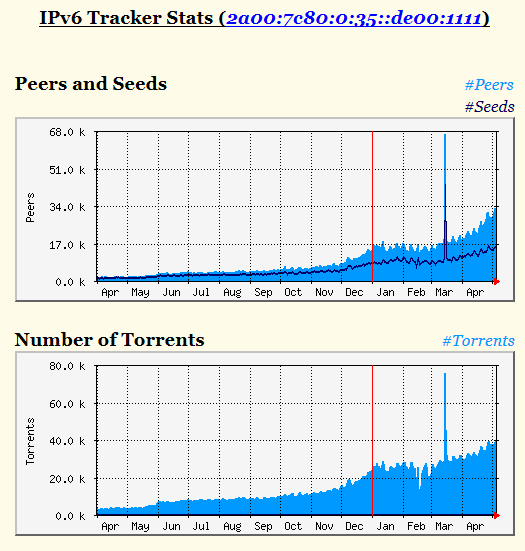 “The growth I am most impressed with is the IPv6 stats. Doubling in less than half a year. Shows where the residential internet is headed. An IPv6 world will be a great world,” Demonii’s operator concludes.