As dozens of headlines relayed, last week was the final chapter in the Grooveshark story.

A fly in the major recording labels’ ointment for almost a decade, Grooveshark eventually collapsed under lawsuit that could have seen it liable for more than $736 million in damages. Instead, the company settled with its rivals for a reported $50 million.

Part of the deal saw the streaming music upstart hand over just about everything to the labels, including its website, mobile apps and intellectual property such as patents and copyrights. Without offering any warning to its millions of users (including many who paid to use the service), on April 30 Grooveshark closed its doors. And that was that.

Yesterday, in a surprise twist to the tale, someone claiming connections with the now-defunct Grooveshark site sent out a number of emails to news sites (this one included) announcing that the famous streaming service was being brought back online.

“Well, I started backing up all the content on the website when I started suspecting that Grooveshark’s demise is close and my suspicion was confirmed a few days later when they closed,” ‘Shark’ wrote.

“By the time they closed I have already backed up 90% of the content on the site and I’m now working on getting the remaining 10%.”

The purpose of this back-up bonanza was to bring Grooveshark back online through a brand new Grooveshark.io domain.

Considering the profile of the original Grooveshark and its recent demise at the hands of an aggressive RIAA, the story is definitely exciting, hence the dozens of reports doing the rounds today in the tech press. That being said, the story would have been even better had it passed the sniff-test. 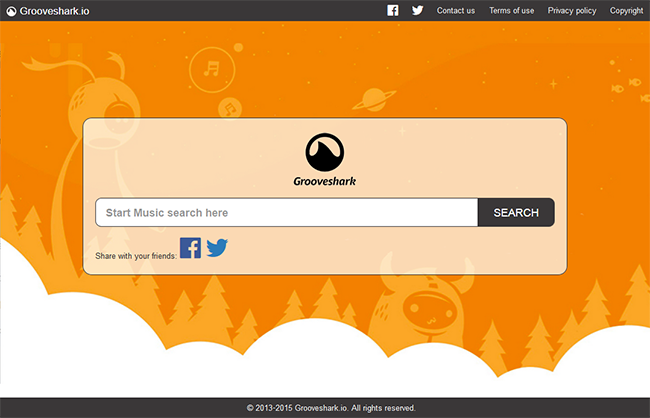 At first glance the site shown above does look a bit like Grooveshark, no doubt about that, but anyone familiar with the original service knows that the similarities end there.

All the community features that made Grooveshark so popular are absent and searches for content show that the .IO variant has nowhere near the depth of library. Admittedly the site’s operators say they are working on bringing those back to life, but the issues run deeper than that.

Sensing a similarity with other sites already exploiting the unofficial, unlicensed MP3 market, we decided to find out the truth behind this supposed Grooveshark replacement. Armed with Google and few clips of the site’s terms and conditions, it didn’t take long to find a very similar site indeed. 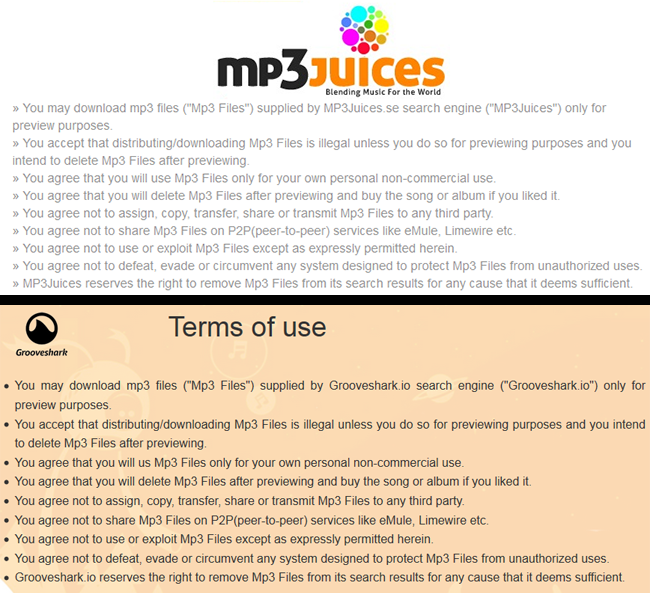 In fact, every other text section on MP3Juices.se (not to be confused with MP3Juices.com which was previously seized by UK police only to return under MP3Juices.to) matches up with the corresponding section on Grooveshark.io.

Of course, the Grooveshark.io people may have cut-and-paste that site’s text to save time, so we wanted some proof of dynamic similarities. They were easy to find.

A search for any term, any artist or any song, returns exactly the same results – in exactly the same order – on both sites. On that basis it’s probably safe to presume that they are either (i) the same sites behind the scenes or that (ii) they use the same search engine and/or the same source content, wherever that may be hosted.

We concede that to some the idea of a reincarnated Grooveshark will be a somewhat romantic one but as we highlighted at the weekend, the practice of passing one site off as another is now really getting out of hand.

Only time will tell if Grooveshark.io will magically transform into a proper replacement for the now defunct site, complete with playlist and community features for example, but it seems unlikely.

As things stand Grooveshark.io appears to be just a re-badged/re-skinned clone of MP3Juices.se, a low-traffic clone of the original MP3Juices. In the scheme of things it’s hardly likely to be an important target for the RIAA, except for one small detail. The labels now own all of Grooveshark’s intellectual property – brand names and trademarks included…..