Samsung Galaxy Note 3 is still one of the most powerful Android devices ever made, even now that 2K models are apparently ready for launch. This phablet has been tested by us this fall and found very impressive, both in the camera area and basically every other area as well. This 5.7 inch phablet was announced in early September at IFA 2013 and it was made available in black and white initially. 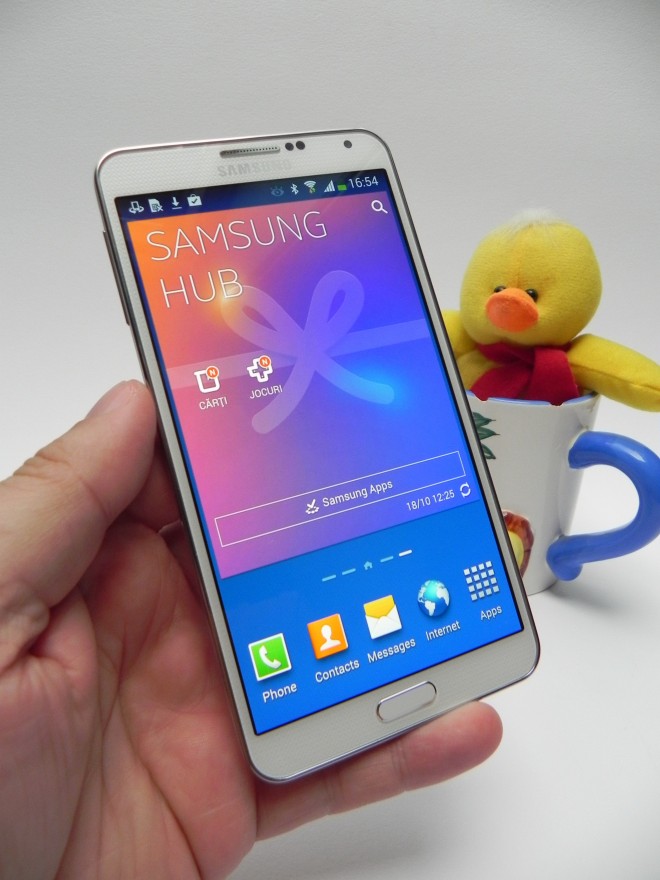 It had a price of $700 initially, but I’m guessing you can find it for at most $650 or even less right now. We’re dealing here with a device that measures 8.5 mm in thickness and weighs 168 grams, which is not bad for such a huge device. The back features a leather imitation, that even sports stitches, but it’s all plastic obviously.

The grip is much better than the glossy Galaxy S4 and Note 2, that’s for sure. Galaxy Note 3 is 12 grams lighter than its predecessor and 1 mm less wide, but it has the same length. I like the design, the extra grip and less rounded allure, so thumbs up for the looks area. The very slim bezel is also very nice and keep in mind that although the sides seem made of metal, they’re actually plastic as well. 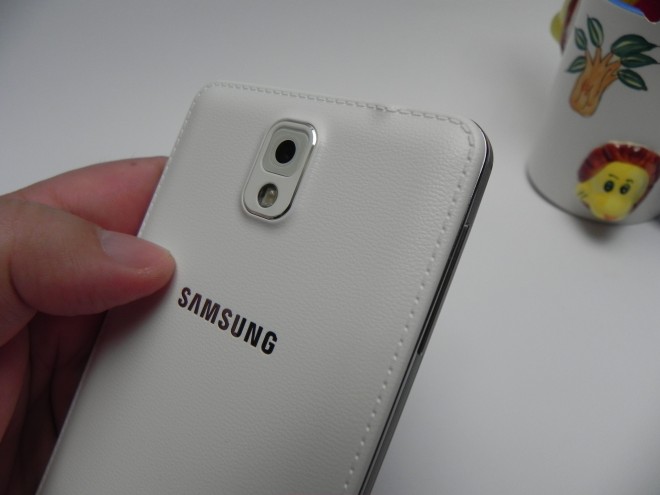 On the hardware side we’ve got the potent Snapdragon 800 CPU clocked at 2.3 GHz and the Adreno 330 GPU. The screen is a 5.7 incher, a Full HD Super AMOLED and the specs list goes on with 3 GB of RAM, 32/64 GB of storage, a microSD card slot, 13 MP back camera and front 2 MP shooter. On the connectivity side we’ve got Bluetooth 4.0, WiFi, microUSB 3.0 with a special design and MHL 2.0. Infrared, NFC, quad band GSM/GPRS/EDGE are also here.

Galaxy Note 3 uses an accelerometer, barometer, proximity sensor and thermometer as well, while its battery is a 3200 mAh powerhouse, that offered us 9 hours and a half of YouTube HD video playback with WiFi on and 50% brightness. This may sound impressive, but after seeing the LG G2 achieving the same thing, it’s hard to impress me anymore. The Note 2 also seemed to get even past 2 days of usage, while the Note 2 won’t keep up with the second day of usage. 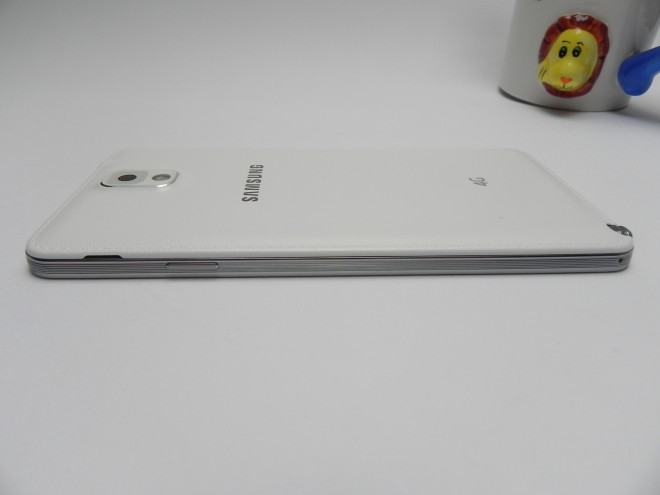 On the acoustics front, we’ve got a TouchWiz player, with FLAC and WAV support, a complex equalizer and the special tweaks Smart Sound and Adapt Sound that we saw on the Galaxy S4. The first equalizes tracks’ volumes and the second is all about tweaking headphones. Overall, the sole speaker at the bottom of the phablet offers a loud and clear sound, good bass, but it’s still not as loud as the BoomSoundtastic HTC One.

The headphones meanwhile are very good, perhaps even better than Apple’s Earpods. Now moving to the display, this 5.7 inch Super AMOLED offers vivid colors, dark blacks, wide view angles, nice contrast and a slight oversaturation that can be corrected from the Settings. We reached 400 lux units here, which is superior to the Galaxy S4 by a lot and the pixels on the screen have an atypical arrangement, shaped like a diamond. We’ve got 2 subpixels per pixel, in case you’re wondering what the atypical Pentile Matrix setup is about. 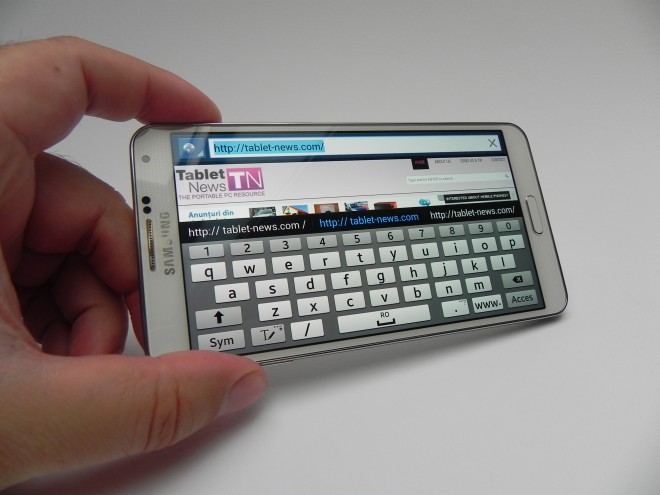 There’s also a Reading Mode you can activate if you want to do some ereading and overall this is a very, very good screen. The camera is one of the most interesting aspects of the Note 3, since on paper it may be the Galaxy S4 cam, but in real life it feels better. We’ve got a 13 megapixel CMOS sensor here with a 1.12 micron pixel size and the sensor size is 1/3.06 inches, while the focal length is 31 mm. The max resolution is 4128 x 3096 pixels in 4:3.

The UI features the effects at the bottom of the screen and options like dual capture at the top, plus flash, low light capture, voice control and video features like slow mo, fast and smooth capture. Settings include picture size, burst mode, ISO, smart stabilization, audio zoom for filming, exposure and white balance. 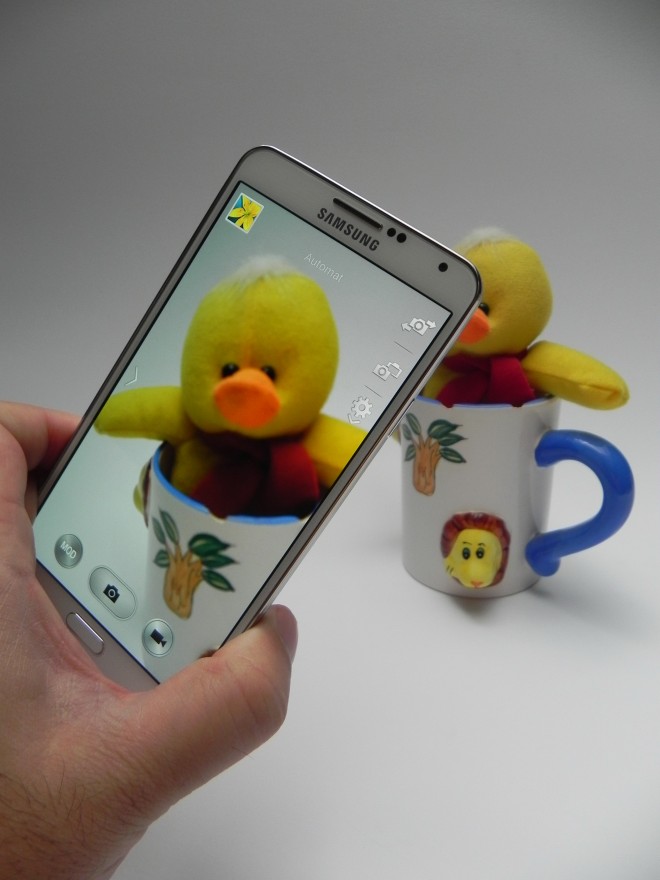 The capture modes are the ones made famous by the Galaxy S4, plus Surround Shot and that Golf shot option. The pictures taken with this device offer vivid colors, although there’s also a slight oversaturation here and the level of detail is truly impressive. We’ve got beautiful colors, nice looking closeups, like the one of the lake and metal acorn and I have to say that the camera is very fast. Overall, this cam feels better than the one of the Galaxy S4 and the HTC One, at least in daylight.

Video is filmed in 4K at 30 FPS, 1080p at 60 or 30 FPS and 720p at 120 FPS, which generates a slow mo video. Full HD video capture allows 4x zoom and 2x zoom you’ll still keep your high quality. I like the high level of detail when capturing video and the good frame rate, while the night and low light capture were underwhelming, with a lot of noise and exaggerated whites in flash pictures. The OS here is Android 4.3 and the web browser on the device is very fast, as shown in the video review.

On the benchmark side, there’s really no point in comparing this device to any other Android model, since it smashes all, with scores like 19.000 points in 3DMark, that no one can beat and 35.000 points in AnTuTu, also impossible to beat. However, I must remind you that Samsung and the Note 3 particularly have been caught cheating in benchmarks…

The device tends to get very hot on the sides after a long period of gaming and it could even reach more than 37 degrees Celsius. As far as the stylus is concerned, this accessory is made of plastic and once you remove it you’ll trigger a brand new palette of options dubbed Air Command. The options featured here are Action Memo, Scrap Booker, Screen Write, S Finder and Pen Window.